We love actress Emilia Clarke as Daenerys Targaryen in the television series Game of Thrones!

Emilia Clarke has most often been seen with brunette locks, but in Game of Thrones she steals every scene she is in with long tousled platinum blonde hair often woven into side braids or softly pinned away from her face.

Her hair when on its messier side can be described as wavy beachy curls with slight teasing; hair that looks like Grunge Chic in Goldwell’s current Trend Alert for Autumn/Winter 2012, inspiration from runway shows including Rag and Bone 2012.

Her look in some scenes is rougher than others. She is of course living in medieval times so her hair is not always picture perfect, sometimes she has dirt scuffed on her face, or her hair looks a bit tangled, but this only adds to her characters appeal. The pale hair makes her complexion look radiant and beautiful. Sometimes she will have a soft rose hue on lips and cheeks, but the staples to her make up look are defined brows, a defined upper lashline, and matte contouring and highlighting to accentuate her great natural bone structure.

Her clothing teams in nicely to make her appear as a grassroots princess, earth tone dresses and corsets with fraying hemlines made from natural fibres like cotton, cheesecloth, and linen. Tarnished silver jewellery accessorizes her costumes.

Who wouldn’t want to be Daenerys?! A mother of three dragons, having the special ability to train them, being impervious to fire and being madly in love with the sexy brut warrior Khal Drogo played by Jason Momoa. 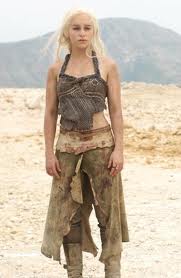 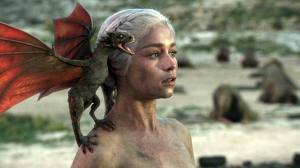 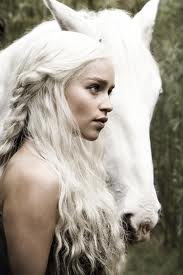