Grimes is Claire Boucher, a female singer, producer, musician, visual artist (about to have an exhibition in New York City), and entertainer harking from Vancouver, now based in Montreal. I see her personal style as a modern sci-fi punky hippy. She has just released her third album titles Visions, the cover of which she illustrated herself. 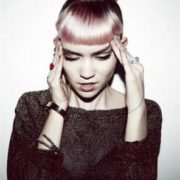 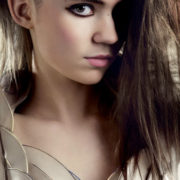 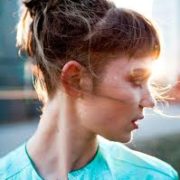 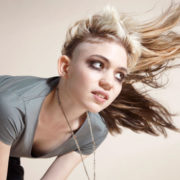 The songstress regularly reworks her hair colour but sticks to the same cool cut – long lengths, short blunt fringe and shaved panels on both sides of her head. The colours she experiments with range from everyday blondes and browns, to platinum blonde, green, silver, blue, purple and pink. She can be described as  having a grungey punky look. Currently, she has platinum blonde with light pastel/violet pink balayaged through her hair.

Her music style links in with her image as a modern-day ethereal gypsy goddess…You have probably heard her most popular song titled Genesis. It is one of those songs that is so easy and pleasing to listen to; it feels oddly familiar like it has always existed, beautiful!

“Grimes music embodies an ambient  dream like state of a future Utopian world…Her album is much like her aesthetic appeal, cutting edge and attention grabbing.  Her sound is easily identifiable and her voice is clearly distinguishable as are her omnipresent, perfectly cut, baby bangs” says Jax25 – wordpress.

She is an icon for us because her style is original and she is not afraid to experiment and express herself through her image. She is young and entrepreneurial; exploring all of her passions/interests and developing her career on her own terms. We all have multiple talents, but it can be difficult to be active in them all at the same time. Grimes is showing us that it is possible; we don’t have to choose one pathway and stick to it, we can explore all of our talents.